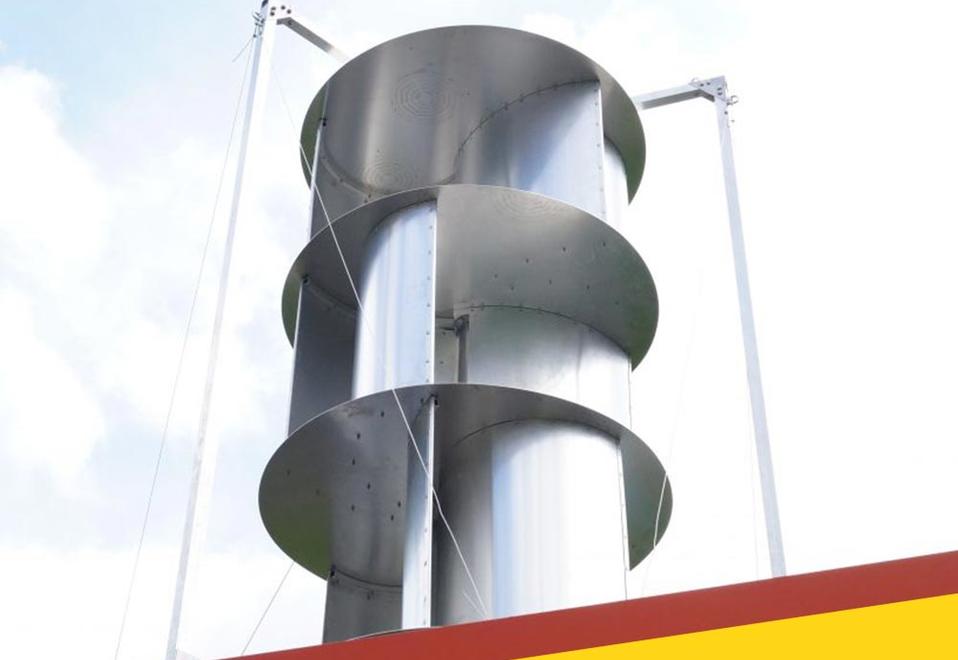 The idea of buildings using their rooftop to generate the energy they need has become a reality thanks to work done by a start-up that has conceptualized a whole new generation of wind turbines, ones that are discrete, eco-efficient and can be installed in the heart of the city.

Wind turbines’ many critics accuse them of being unsightly, extremely noisy, made out of non-recycled materials and intermittent in their generation of electricity. Unéole founder Quentin Dubrulle is making a bet that a completely different version of wind energy can win over these detractors, one involving miniature turbines that are made from recycled and recyclable materials and which can be installed in city centers.

Silent mini-wind turbines that are almost impossible to see

Unlike the big three-blade wind turbine models that people often see dotting farmers’ fields, Unéole has come up with a vertical axis wind turbine that is capable of capturing the swirling winds typifying urban environments.

The fact that these new models are only 2.7 meters tall and neither vibrate nor emit noise is another decisive advantage in terms of their aptitude for being installed on city roofs. Critics would struggle to accuse Unéole’s turbines of being ugly, polluting or noisy!

Beyond these initial improvements and in order to be able to generate energy even when there is little wind, Unéole’s system optimizes energy production by combining solar and wind energy. The end product is a mini-wind turbine that is installed on city center rooftops and covered by photovoltaic panels.

The combination of wind and PV solar power has other advantages as well, namely the way the solar panels weather-proof the wind turbines, increasing the systems’ working life while making urban conditions more livable for residents.

“Putting a PV overlay above a building gives it shade from higher temperatures. The rooftop is no longer overheating and the building needs less air conditioning to cool down”.

A system that is also profitable

The solar-wind combination means this mixed energy platform works all year round. Using the wind turbines, electricity can be generated at night and during the winter, with PV taking over during the sunniest and/or windless periods.

This optimisation translates into 40% more energy being generated compared to a 100% PV system.

According to Dubrulle, “With this solution, any modern two-story building becomes a net producer of energy. Three story buildings become almost autonomous. Although at four floors or more, the building will need grid-supplied energy to supplement its own rooftop production”.

By itself, a mini-wind turbine is capable of generating 1,500 kWh annually, the equivalent of three computers running at full capacity over an equivalent period. Unéole also claims to be offering an urban renewable energy production solution that is not only cheapest in terms of its overall carbon cost (with the wind turbines being manufactured locally using recycled and recyclable aluminum and stainless steel) but also the most profitable, a particularly important consideration given recently skyrocketing energy prices.

On average, Unéole systems run at around 10 to 14 cents per kWh.

In Dubrulle’s view, “Once the project has been funded and amortized for a few years, customers end up with energy generation costs that are two to three times cheaper than if they were to buy their energy off the grid”.

The company, which markets to companies but also to public sector institutions and social housing associations, has already installed wind turbines on several rooftops, notably in the northern French cities of Arras and Roubaix. In 2021, Unéole inaugurated its first mixed energy platform at the CD2E “Eco-enterprise development center” – a green transition site located in Loos-en-Gohelle, near Calais. The systems are currently too expensive for private households although there are plans to target this market within the foreseeable future.