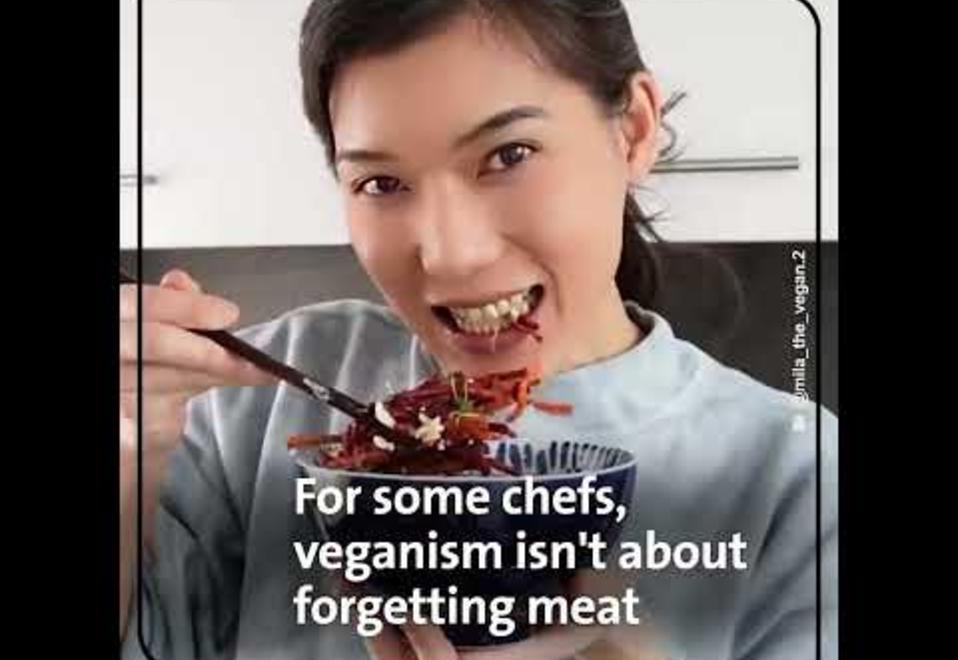 “Most of the time, my brother and I woke up in blood,” explains Adrian Wu in Taipei. “I’m sure my mother found it traumatizing, finding us waking up every morning covered in blood all over our faces. Nobody knew why. We took a lot of Chinese medicine. I was skinny, I had jaundice.” It wasn’t until Adrian and his brother went to stay with a family friend, who fed them soy, peanut and sesame milk, traditional plant-based milks in Taiwan, that they began to put on weight. His mother couldn’t believe it. Within a few years, Adrian, like a growing number of millennials, became vegan, and symptom free. Now, he’s part of a growing group of vegan influencer chefs on Instagram. Cooking from their kitchens using their own cameras and mics, these chefs have sauteéd and edited their way to fame and influence. But beyond health, what’s driving the change?

In recent years, the food industry’s impact on the climate crisis has left a bitter taste. Vegans’ mantra to limit our impact on the planet by reducing our consumption of animal products is no longer a niche opinion but a veritable fact. Our consumption of meat globally has reached epic, unsustainable proportions. Over 70 billion animals are reared and slaughtered for food every year, and two thirds of them are factory farmed, hemmed into cages or metal pens, crowded, without daylight. The mass consumption of animal products continues to put a strain on the planet, making up 11% of annual  greenhouse gas emissions. As such, the rise of veganism has been considered both extreme and inevitable.

The impact cannot be underestimated. Eating a vegan diet for one month would save approximately 30 animal lives, 913 square feet of forest, and 127,000 liters of water.

The Proof is in the Pudding

For chefs like Instagram chef WoonHeng Chia, it’s still flavor first. “Once, I made vegan drumsticks using tofu skin, and a lot of people couldn’t believe it, and said, “it looks exactly like a drumstick!” WoonHeng grew up in Malaysia, and moved to the US 30 years ago. For her, many of the meat recipes she turns into vegan use the cuisine of her childhood. “Those are the foods that I grew up with, that I looked forward to at the vegetarian stalls. Those drumsticks are made out of yuba skin or tofu skin.” WoonHeng’s videos collect millions of views and are followed around the world. It is a visual revolution that she helps lead, as well as a dietary one; curious omnivores and vegetarians who want to ‘see it to believe it’ before they make the change, can do so. WoonHeng believes that for many, it is the excitement of seeing beloved meat dishes turned into vegan options, using substitutes like tofu and mushrooms, that drives their transition away from animal products.

It makes sense that social media, and its ability to connect others immediately, is the birthplace of a diet that is inventing itself daily. “People are collaborating,” explains Zacchary Bird, an Australian vegan chef whose latest cookbook ‘The Vegan Butcher’ prompted endorsements from New Zealand’s Prime Minister Jacinda Ardern and Britain’s Nigella Lawson. “A great example of how social media and veganism have grown together is aquafaba, which is the liquid from a can of chickpeas. It's this miracle egg replacement, but you can go and track the history in a Facebook group called ‘Vegan Meringue Hits and Misses’.”

Products like aquafaba are a classic example of the rapidly expanding vegan food industry, which is expected to value at $22 billion by 2025.

As vegan food trends like Veganuary continue to grow online, the transformation seems to be as much an appetite for community, as it does for delicious food. As Zacchary puts it, “we’re using the power of social media to very rapidly test and bring new products and ideas to the community, as a community.”