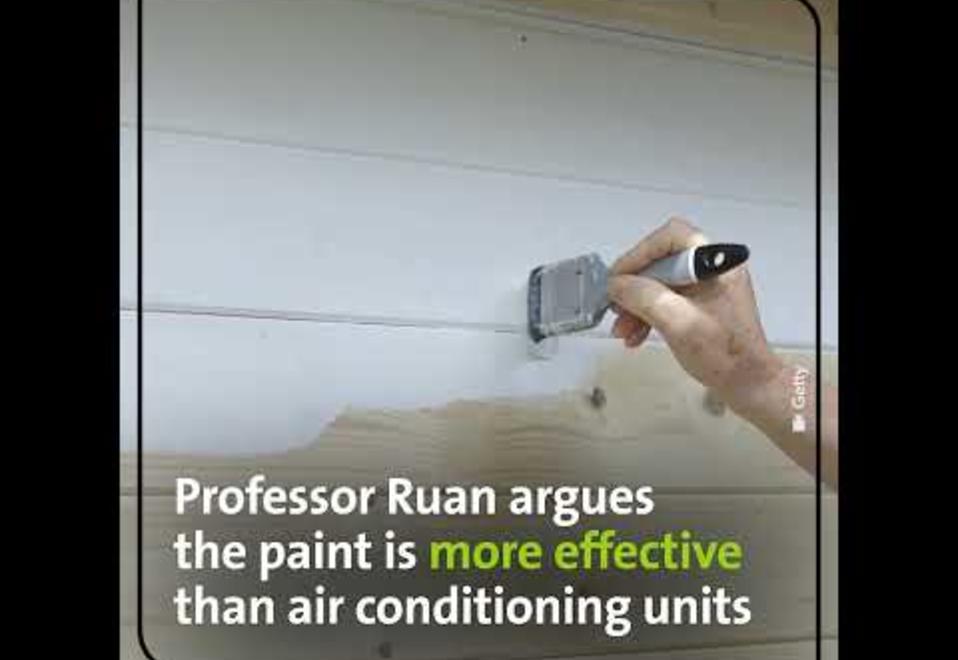 The color white reflects light in general and sunshine in particular. In the USA, Purdue University researcher Xiulin Ruan and his team have developed the world’s whitest paint, one that reflects 98% of all light. Surfaces that have been painted with it are therefore cooler than the air surrounding them.

Air conditioning is a real factor in global warming, generating something equivalent to 5% of all CO2 emitted by the French construction sector. White paint, on the other hand, is a much more eco-efficient way of cooling buildings. As noted by Xiangyu Li, a Massachusetts Institute of Technology (MIT) researcher seeking to fight global warming by designing the world’s whitest paint, “When we use air conditioning, we use electricity to move indoor heat outside, generating more CO2 and ultimately a greater warming effect”. Hence the idea – and scientific feat – of developing a nearly immaculate white paint and repainting buildings with it to lower their ambient temperature.

In and of itself, there is nothing new about the technique, which has long been used in Southern Europe but also increasingly in cities like Los Angeles or New York, where efforts are being made to paint rooftops white as a way of mitigating urban heat islands. As per the albedo effect, white paint absorbs very little sunshine. The clearer the paint, the more light it reflects. Conversely, the darker it is, the more light it absorbs.

Up until now, white paints have reflected between 80 and 90% of all light – with a direct correlation existing between the whiteness of a paint and its reflectivity. The new variety being developed today has a target of 98.1% :

With any surface exposed to full sunlight now expected to be 4.5 degrees colder than the air surrounding it – a refrigeration effect that the more traditional paints could never achieve.

This quantum leap is the product of years of work by Xiulin Ruan, a Purdue University Professor of Mechanical Engineering. Together with his team of researchers, Ruan started by examining more than 100 metals before ultimately opting for a heavy concentration of barium sulfate, which is also used for photo paper and cosmetics.

"Our innovation is not only that we use barium sulfate but also the way that we have maximized light reflectivity despite the constraint we face of not being able to apply too thick a coating to buildings”.

The trick has been to vary the size of the particles used in the paint, and to augment light reflection efficiency in this way.

The new paint variety could constitute a real alternative to the remedies customarily applied in these situations, namely the rationing of air conditioning.

According to the researchers, immaculate white paint has a refrigeration capacity of 10 kilowatts when applied to a 93m2 rooftop and therefore generates more power than the kinds of air conditioners that tend to be installed in most homes.

Having said that, Li also notes that despite this cooling performance, some buildings may still require air conditioning. “Paint can lower temperatures but not humidity levels. If the summer is both hot and humid, a/c will still be needed. But the paint will have reduced the overall bill”.

Note that an April 2021 Guardian article written by Sheffield University (UK) researcher Andrew Parnell questions the impact of large-scale barium sulfate extraction. The argument here is that the CO2 generated when mining barium sulfate should be compared with the emissions saved through a lesser use of air conditioning.

It remains that the new paint, the whitest in the world (and which now features in the Guinness Book of Records) is due to hit the markets soon. Durability tests are the final hurdle to overcome.