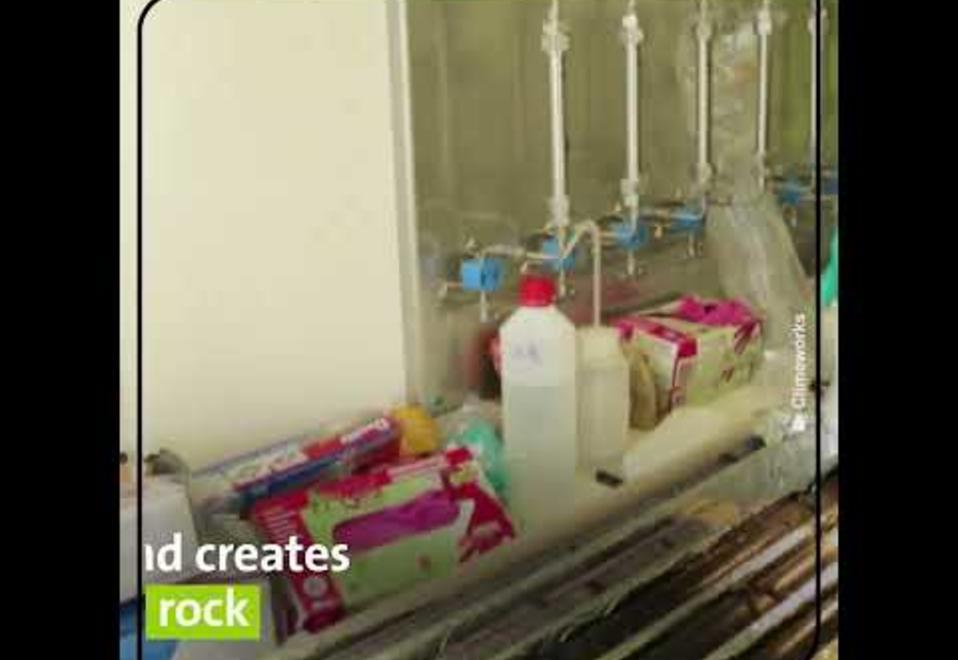 Although more complex and costlier than capturing and storing industry-emitted CO2, the prospect of being able to capture CO2 directly from air has sparked widespread hope that the planet will in fact be able to achieve its carbon neutrality targets.

Iceland’s recently launched Orca project has become headline news. The project designer (Climeworks AG, a Swiss company working in partnership with Iceland’s Carbfix) describes this atypical industrial site – comprised of huge fans drawing streams of air into boxes known as collectors - as the world’s largest "direct air capture" (DAC) plant. The idea is to suck in air, use a chemical agent known as sorbent to filter out the CO2, release this by heating it up and then inject the quasi-purified end product into basalt to a depth of 1000 meters so that it can then be mineralised. The energy powering this process is supplied by a nearby geothermal plant. The goal is to remove 4,000 tons of CO2 from the atmosphere every year.

Carbon capture and storage (CCS) processes are some of the most advanced weapons that humankind possesses in its battle against global warming. It remains that these techniques were first developed to capture industry-emitted CO2 and it is this original function that still seems most promising today, at least for the time being. As explained by geologist Michel Malo, who led the University of Quebec’s CCS research programme in the late 2000s, "In North America, we started working on CCS to mitigate pollution, first from coal-fired power plant and then from cement works, refineries and petrochemical complexes. The goal was to recover the CO2 as it came out of industry smokestacks. The initiative sparked enormous global enthusiasm but this dwindled over time. The projects were too expensive to be viable without substantial public funding, which was hard to come by. Today, however, climate concerns have reached a point where both industrialists and public officials are sufficiently motivated to do something about the problem”. To exemplify this renewed interest, Malo cites the Quest tar sand processing plant, operated by Shell in Canada’s Alberta province and sized to recover something like 1 million tons of CO2 annually. The project costs a whopping $1.3 billion, however, funded in part by $865 million in Canadian government grants.

Annual global capture and storage of CO2 is a mere 40 million tons.

These are huge sums for a quantity of CO2 that is tiny compared to what the planet needs. As noted by physicist Florence Delprat-Jannaud, CO2 coordinator at IFP Energies Nouvelles, "Annual global CO2 storage nowadays is a mere 40 million tons. Yet the International Energy Agency’s latest report estimates 4 gigatonnes (GT) will need to be captured by the year 2035 – a 100-fold rise in only 15 years – rising to 7.6 GT by 2050". The prospect is daunting because even though some technologies have reached maturity, the same cannot be said about the branch’s commercial aspects. The various capture processes (post-combustion, oxy-combustion, etc.) are still very expensive, accounting for nearly 65% of total process costs. Moreover, out of the 60 or so existing projects (see map), many remain in a pilot phase or are still under construction. Only 26 (located in North America, the North Sea, China and Australia) are fully operational.

Delprat-Jannaud goes on to note that, "Alongside the other levers being applied, CCS has the job of cutting CO2 emissions from thermal power plants and industrial facilities". The clear implication is that many more projects of this kind will be needed, raising questions in turn about DAC’s credibility. "A few years ago, I (Delprat-Jannaud) admit that I probably wouldn't have been interested in this kind of solution. But it has become a feature in most if not all carbon neutrality transition scenarios today. Meaning it has become central to our thinking, if only because of the imperative that we explore all possible avenues enabling us to achieve our goals. This particular lever can offset agricultural and air transport emissions. That’s crucial since by themselves, reforestation and soil-based CCS won’t do the trick”.

Mitigating industrial emissions remains a priority, however. "The two technologies are a whole other order of magnitude. We’re talking about Orca capturing 4,000 tonnes, versus 1 million for an industrial complex. The less concentrated the CO2, the harder it becomes to separate it. And CO2 concentrations in industrial emissions tend to be about 10%, versus 0.04% in the atmosphere. Direct capture from air therefore requires much more energy so it’s much more expensive”. In short, the main obstacle is the quantum of investment, even after emissions’ "cleaning" effect is added to the equation. Depending on the types of emission and on storage conditions, Delprat-Jannaud estimates that the total value chain can cost between 50 and 180 euros per tonne. With a CO2 price of  ca. 60 euros per tonne, public funding is imperative for project viability.

Depending on the type of emission and CCS storage conditions, the total processing cost varies between 50 and 180 euros per ton.

To have any hope of eventually becoming profitable, DAC must also be able to rely on cheap renewable energy; a large space (given its substantial footprint); and the proximity of storage tanks (with CO2 pipeline transport costs averaging around $1 million per km according to Michel Malo). Hence Delprat-Jannaud’s prediction that, "The direct air capture (DAC) market will take until at least 2040 before it finally stabilises". On top of this, given a global CO2 capture target of 7.6 GT by the year 2050, the IEA estimates that 2.4 GT will have to come from DAC. This is a considerable amount and means that from now on the technique must not only be taken seriously but also be included as a central component of global carbon neutrality plans. Indeed, whereas industrial emission CCS only seeks to limit CO​​​​​​​2 emissions caused by the burning of fossil fuels, DAC goes much further by removing CO​​​​​​​2 from the atmosphere altogether and sequestering it permanently in carbon sinks. This "negative emissions" mechanism is unassailably virtuous but can only become viable if performance improves massively - implying disruptive innovation for years to come..

There are currently about 15 projects operated by the three companies leading this field, namely Climeworks, Global Thermostat (United States) and Carbon Engineering (Canada). Current plans include the commissioning within four years of one site in Texas and of another in Scotland. The aforementioned companies are likely to gain real momentum thanks to funding provided by other parties worried about their own decarbonisation agendas. Climeworks’ customer base is comprised of several thousand individuals but also some major players - including Microsoft and the Swiss Re insurance company, both of whom are relying on the new technology to achieve their own net zero targets. Lastly, there is the possibility that Washington DC will also decide to invest in R&D in this area.

Social acceptance of this effort remains problematic, however. Storage is considered very safe since CO​​​​​​​2 can be injected either into depleted (and demonstrably hermetic) hydrocarbon deposits or into deep saline aquifersthat are more than 800 meters underground, a depth at which CO​​​​​​​2 liquefies and requires less room. Hence the need to inventory all the many aquifers of this kind that can be found worldwide. Along these lines, the head of IFPEN, which entered into a strategic partnership with Total in 2009, considers that, "Oil companies have all the skills needed to store CO2. They are in full command of the relevant methodologies and possess the industrial capabilities needed for their implementation”. One example is the way that oil tankers have long mastered CO​​​​​​​2 injection techniques allowing them to recover residual oil deposits from less productive fields.

According to Malo, "These companies are very proactive in CCS efforts – being the reason why NGOs like Greenpeace, which seeks a complete break from fossil fuels, are so hostile to CCS”.  More generally, underground solutions of this ilk tend to worry the general public - "especially in Europe", according to Jannaud-Delprat, explaining why she believes that CO​​​​​​​2 storage will first develop offshore. Last year's launch of Norway’s Northern Lights, mega-project, launched in the North Sea by three leading energy companies (Shell, Total and Equinor), offers a good case in point.